I added a new album to my iTunes (version 11). It has been copied to my Media folder and it plays fine. But it's not listed in my Albums, Artists and Songs sections. I would like to see the artwork in my Albums or list of songs.

I'm able to find the album by searching. What to do? Any ideas?

I believe that adding it again might help, but how do I remove it from my library when it is not present anywhere except search results?

It may not be displaying as expected if the metadata for the song doesn't match the filenames.

You can try to search in the playlist "Recently Added" for the items you have added. If they appear in there, right click the items and click on the "Options" tab and set "Media Type" to "Music".

Note that I am not currently on a Mac computer with iTunes installed and have thus taken the two screenshots above from the internet. I do not own the screenshots.

In your phone go to Settings then Music then in Library choose Sort Albums By Title.

Check your Music and all your albums would be listed.

I found them under compilations.

Some albums need a little more info: add names in the sort areas, and check the "Show Composer in all Views" check box. Worked for me. 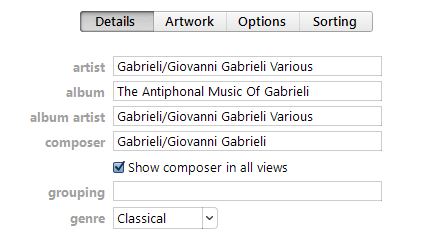 Under get info - make sure that the check box 'compilation' is unchecked. This will force the album to appear as an album and not a compilation..

In my opinion the sorting field should be used for sorting ONLY, but it doesn't appear to be designed that way - or else it's a bug. Based on the way the query works, it will lump two albums of different names under the SAME ALBUM NAME if the sort as field under album are not unique.