I own a Japanese version MacBook Pro, that of course has the Japanese keyboard with the particular keys (around the space bar) that are used to switch between the various forms of Japanese (and English) language input. This is running OSX Lion FYI.

My problem is that the machine sometimes seems to switch into Japanese input mode even when no one has touched the input mode switching keys. This is issue also happens on my wife's MacBook running OSX Snow Leopard and a friend's iBook running Leopard, all of these being Japanese model machines.

Does anyone know of a way to force the OS to ONLY switch the input language when someone actually chooses it from the actual pull down menu?

Perhaps all three of us are hitting the input keys by mistake (i highly doubt that though). If that is the case then it is a design flaw.

Any input (non-Japanese :) would be greatly appreciated. 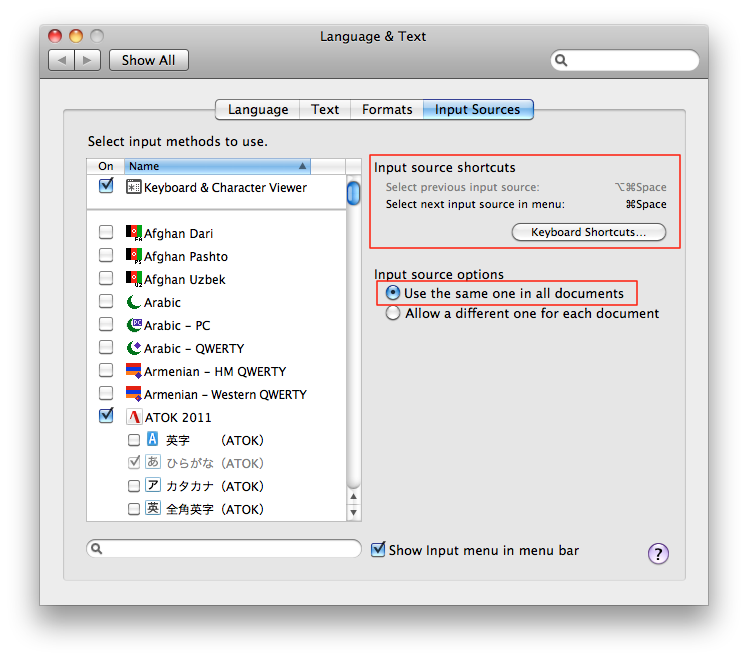 Could it be that you are accidentally hitting the input source switching shortcuts? If so, you can disable them in the System Preferences.

Also, if you find that the input language changes when you switch apps, this is actually normal behavior. By choosing xe2x80x9cUse the same one in all documentsxe2x80x9d in the input source options, you can greatly decrease the chances of this happening. (With the exception of a few apps that seem to ignore/override this setting. Very annoying.)

If you've experienced this problem only when using Japanese keyboards, then I guess there is a different cause. I use US keyboards, but this unintended switching happens to me too. Mostly when switching to Adobe apps.