Which wireless controller is more compatible with Macs: Xbox 360 or PS3?

I want to buy a gaming controller to play games like GTA3 from the App Store. Which controller will be most compatible with Mac OS X and games on Macs?

Especially it will be useful to know if you have any experience with setting up either PS3 or Xbox controller for Mac.

The Xbox controller requires an additional USB dongle from Microsoft to get working if you want to use a wireless controller. Otherwise, you'll have to stick to using it as a wired controller. You can get the Xbox 360 controller drivers from here or here is an alternative driver.

I thought the drivers for the PS3 controller were a little more stable and that the stick response was snappier than the 360 controller. But I much prefer the 360 controllers layout, weight and overall tactile feel. Personal preference there really.

I only have the Xbox controller, I set it up using this video but to be honest I didn't like it, something doesn't feel right about using a controller and playing games on my Mac.

But they are both compatible, you just need the correct accessories to connect them. Decide by choosing which one you prefer.

A little app called Joystick Mapper can allow you to use any compatible controller with any gamexe2x80x94whether it supports your gamepad/joystick or not.

All you need is a connected joystick or gamepad to get started. 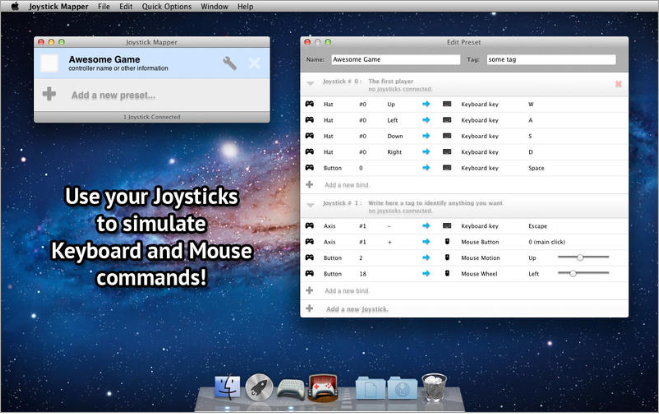 From there, you can create a new joystick and select it in the app's settings. Once you've done that, you simply bind buttons on your device to keyboard strokes and mouse actions to control whatever game you want in the way you want to control it.