I have a Galaxy Nexus running CyanogenMod 10.2.1 (IIRC that's the last official stable version released). Beside both being quite old they're working for years without any big issue, but yesterday I found something strange: since sometime between 2019-01-02T21:38:35-0300 and 2019-01-03T08:47:13-0300 it started storing wrong dates from screenshot creation times like this: 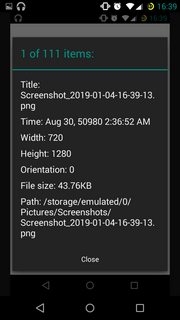 It's quite easy to understand how it's getting this weird date: it's taking the Unix timestamp and multiplying it by 1000. I tried to track down the issue by checking the source code: there was a change on GlobalScreenshot.java some years ago, although it don't explains why this bug started happening just now.

By now I only saw screenshots with the wrong date, so in the best case it will not cause issues to apps or other parts of the system. It's also not causing issues when synchronizing files using MTP (beside the date being something like xe2x80x8e"29 xe2x80x8eNovember, xe2x80x8e1983").

Is it similar to the Y2K problem? Should I worry about this? If I should what can I do?