What permissions are granted to an app with device administration privileges?

Does a Device Administrator application have any/all permissions such as contacts, storage, etc.. ?

It's not clear from developer.android.com device-admin whether or not these admin rights also imply application permissions.

Or does device administrator simply mean that it can only do the things in the policy it's allowed to such as lock the screen, wipe the phone, prevent (easily) uninstalling the app, etc.. and that permissions to access private information is managed via the permissions settings only ?

Yes, a device administrator only has permissions to do what it says.

(Answer made from the following sources):

As you explicitly pinged me for an answer:

AFAIK, apps can only use permissions declared in their Manifest xe2x80x93 so there should be no way an app could add itself permissions it never requested there.

DeviceAdmin gives high extra powers (apps are e.g. protected against uninstall, and can access some extra stuff they couldn't do without). What exactly this includes, I'm not sure. I only can refer to a specific part of the page you've linked, where the powers are explained. I cannot vouch for the pages completeness (or correctness at that: wouldn't be the first time some error made it in there). 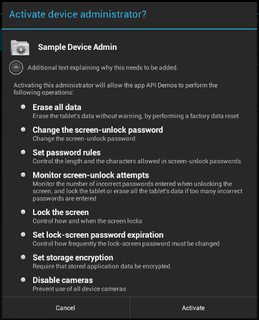 You might remember there's something else carrying a similar name: ADM, the Android Device Manager. Checking above screenshot with that in mind, gives you an idea on the basics: ADM allows you to permit those functions (though AFAIK it doesn't feature "Monitor screen-unlock attempts" and "Disable cameras"). But this is a typical example of using most of those features.

TL;DR: AFAIK DeviceAdmin cannot grant permissions to any app (including the DA-app itself), especially not if the app-in-question did not declare them in its Manifest. It just gives the app carrying this permission access to specific system features not available otherwise.