how to have two applications play sound simultaneously?

I want the music to keep playing in the background while I practice Spanish on this DuoLingo app. The music player stops while the duolingo is trying to play sound as of now. Is this possbile?

As for my device, whenever I play duolingo and music at same time then the audio fades slightly with CM 12 built-in player

Now if you are OK with any third party application. Here is it what you need to do.

You CAN play two audio simultaneously. I don't think it's possible with the stock Music player. You can install a third party music player. In Rocket Music player you can configure the Audio Focus to ignore the other audio apps while this player is playing. You can do so by setting the option under the Rocket Player Settings > Sound > Audio Focus, 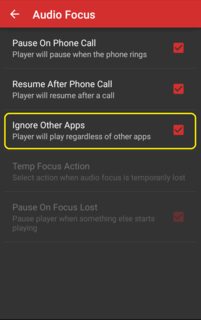 While I tried to play a song in Google Play Music app and played a song in the ESFileExplorer the Play Music song stopped. But while doing the same in Play Music and then in Rocket Player the songs never paused. It both played simultaneously.

As far as I am aware, I don't think this is possible as yet. The os can only play one sound at a time through the speakers. (I.e. It cannot play multiple sound streams simultaneously)

You can play multiple videos in youtube, or stream audio in multiple tabs, in mozzilla firefox. but it gets closed after some time, mybe 15 minutes, maybea ram issue.